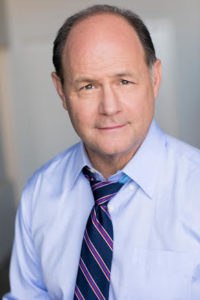 Charlie began his professional career in Chicago during the Improv comedy boom of the 1980s and spent time working as an actor, writer and director with the famed “The Second City” comedy theater. In the mid 1990’s Charlie move with his wife and family to Los Angeles and continued developing his career as a TV, film, landing recurring roles on “Arrested Development”, “According to Jim” and the popular cult hit, “Scare Tactics”.

In 2008 Charlie teamed with Steve Carell, and Vance DeGeneres to form Carousel Productions. He was the Executive Producer of the 2011 Warner Brothers film Crazy, Stupid, Love and the 2013 New Line Cinema production, The Incredible Burt Wonderstone. In television he developed and co-created the series Inside Comedy that ran for four seasons on Showtime.

He left Carousel in 2015 and started his own production company; HighWaterMain Productions and is currently producing several TV and film projects including the indie comedy THE FLAMING JERK, Executive Producing a TV series being developed at HBO, and producing a new film project currently being packaged, THE RIDE.