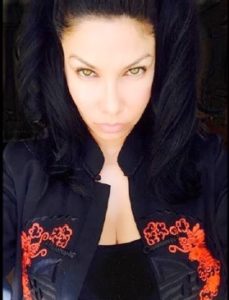 Crystal Santos was born and raised in Los Angeles, California. Her parents are Antonio Santos and Cynthia Davis, her father is from Mexico and her mother is Mexican American. She is a world recognized Kung Fu Master and advocates protecting and preserving life at all costs through Kung Fu.

The first style Crystal was introduced to was boxing, her father Antonio Santos was a boxer. At the age of 18-19 she briefly trained in Muay Thai, shortly after she was introduced to Grandmaster Eric Lee and studied Kung Fu, she fell in love with it and enjoyed learning the style and still actively trains with her Sifu Grand Master Eric Lee and in Wing Chun with her other Sifu Grand Master Samuel Kwok who have become like fathers to her. Crystal started in the stunt industry and has many great mentors.

While working as a stuntwoman she studied with Master Simon Rhee and with Grand Master Gene Lebell and stunt car driving with Rick Seaman. She became a dual Bullwhip Master under the instruction of Noby Arden-Kreish of the Wallenda circus family, also, Crystal is trained by Devil Dog Tactical Weaponry team by Marine Robert Garcia. She went on to action acting and enjoys a successful career as an Action Actress and is currently the lead actress in the TV Show Man At Arms: Art of War on the El Rey Network. Her career as an action actress has flourished because she is one of the few action actresses that can do all of her own stunts and does not need a stunt double, bringing an real element of storytelling to any film or show she is involved in. Her many credits include, Bare Knuckles, War of the Worlds, Lone Ranger, The Monk, Argo, Death Proof, CSI, Gang Related, The Martial Arts Kid, and her upcoming film The Boom Boom Girls of Wrestling, Agents of Shield to name a few. Martial Arts Awards and Inductions: Inducted into The Worldwide Martial Arts Council on August 23, 2014. Inducted into the Action Martial Arts Hall of Honors on January 24, 2015. Inducted into The Munich Hall of Fame for Martial Arts on April 18th, 2015. Inducted into the Masters Hall of Fame June 6, 2015. Inducted Suisse Hall of Honours (Martial Arts) September 24, 2016.