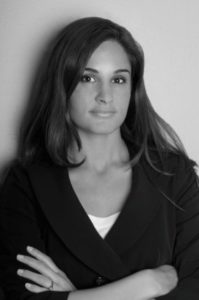 Elsa Ramo is an established entertainment attorney, known as one of the field’s primary legal resources for producers, financiers, and production entities in film, television, and digital content. She started her legal career at the University of San Diego School of Law, from which she graduated in 2002, and proceeded to establish the Los Angeles office for a royalty litigation firm.  After several clients approached her to handle their independent productions, she founded her own firm on the Universal Studios backlot in 2005.  Today, her firm, Ramo Law PC, operates out of Beverly Hills. She is licensed to practice in California and the District of Columbia.

Variety honored Elsa Ramo in their 2014 Women Impact Report.  The Story Exchange listed Elsa in their Power List, dubbing her the best advocate for creative minds.  Indiewire named her one of the “Women to Watch” in the ‘indie’ entertainment scene. And California Lawyers for the Arts awarded her the 2010 Artistic License Award along with Maria Shriver for her outstanding pro-bono work for artists and arts organizations.

Elsa Ramo lives in Santa Monica with her husband and son.

More information about Elsa Ramo and her company can be found on her company website: www.ramolawpc.com.