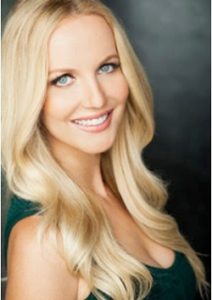 Lucia Oskerova, Slovak – Canadian international actress and model has studied, lived and worked all over the world, from Slovakia and Germany in Europe to Canada and The US in North America, to Istanbul. She speaks four languages, loves traveling and enjoys experiencing the life, language and culture o f everyone she meets.
At the age of 15, Lucia was spotted by a modeling scout and her career in fashion took off. She became a Fashion Week star, walking for Dolce & Gabbana, Prada, Dior, Chanel, Fashion Rocks, Leone, Bob oli and Vetrina. John Casablanca, one of Canada’s biggest agencies, took note of young Lucia’s quick rise to fame in the industry and signed her on the spot.

Lucia blossomed creatively in Canada. She enjoyed continued success as a model and before long, ventured into the entertainment industry. She was cast in several outstanding network TV series including Smallville, Battlestar Galactica, The Guard, Painkiller Jane, Very Bad Men as well as in the feature film National Lampoon. She also booked many national commercials and was chosen as spokeswoman for The 2010 Olympic games and several beauty product lines.

Not surprisingly, Lucia found yet another outlet to her creativity: Design. Upon graduating from the British Columbia Institute of Technology with a degree in Interior Design & Architecture, Lucia realized that acting was her true passion and headed to Hollywood, committed to developing her acting skills.She began her journey in Los Angeles by enrolling with “Acting Corps,” fully immersing herself in learning the ins – and – outs of the entertainment industry. She then worked on fine tuning her skills with renowned accent coach Kelly Reiter, and famous acting coaches such a s Larry Moss and Eric Morris.

Lucia now lives between Istanbul and Los Angeles where she continues her work as a model and actress. The success of her shoot with Chopard Jewelry landed her in the September issue of VOGUE. A s for acting, Lucia is thrilled to be part of the feature film The Tragedy, playing the lead character “Anna. Lucia looks forward to further collaborating with different artists for creative, innovative and bold projects that reflect her versatility and innate sense of adventure.