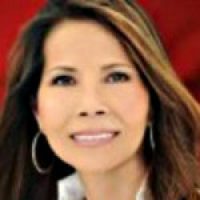 Van Choat is an author and dedicated defense acquisition professional at the Space and Missile Systems Center, Los Angeles Air Force Base. Born in Vietnam and orphaned at the age of four in a bloody Viet Cong massacre. Van was shuttled among a variety of custodians whose guardi-anship ranged from her grandmother’s stoic love to open abuse by rela-tives and strangers. Surviving as an orphan in war-ravaged Vietnam left her with a first-hand perspective on what life is like for orphans every-where.

At age fifteen, Van escaped to the United States with her adopted family on the eve of Saigon’s fall, April 1975. Relocating to a small Texas town, Van graduated high school with honors and married her high-school sweetheart, Ronnie Choat, a U.S. Army paratrooper, who gave her two sons and a new mission in life, before his untimely death from cancer in 1987.

Left alone to raise two young boys, she continued her college education, and obtained an undergraduate degree while working a full time job with the Department of Veteran’s Affairs. Later, Van completed her Master’s Degree while beginning a new career in defense contracting with the De-partment of the Air Force.

Since 1991, Van has returned to Vietnam many times, maintaining close ties with friends and family who remained there. Van has written a book recounting her survival as an orphan in Vietnam and early life as an im-migrant in America Through the book, Van renews her vow to help or-phans in Asia and everywhere find more secure lives, peace, education, and above all, love. Raising awareness of the difficult circumstances or-phans find themselves in every day, and the fact that in many Asian countries orphans face prejudice and hostility through no fault of theirown, and for no reason other than centuries old cultural bias, is the impe-tus of her story.

Van believes supporting LIFF and The Lotus Light Children’s Charity has a true sense of purpose, and shares the hope she has for all orphaned children: An end to cultural discrimination, hunger, universally desper-ate circumstances, and the beginning of a life with hope and boundless possibilities. An orphan child is a blameless child, who has not chosen to be alone in this world without a Father and Mother, and within each and every one of them beats a precious, though lonely heart. They deserve all we can give. www.vanchoat.com